Diablery at The Green Door Store 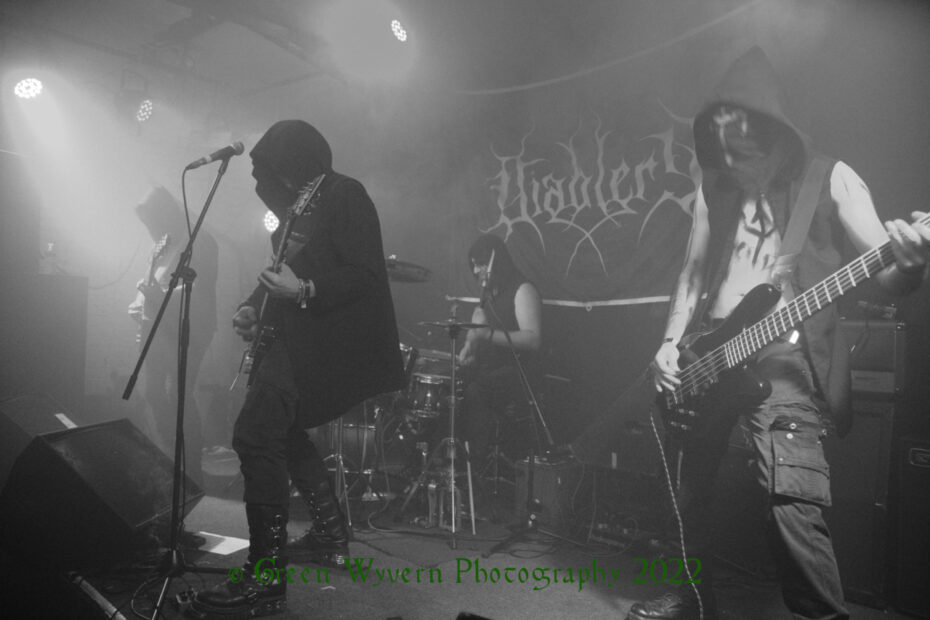 Sometimes the world doesn’t work the way that you want it to and external factors disrupt even the best laid plans. The first weekend of June 2020 was meant to be the sixth edition of South Coast Extreme Metal‘s Doomsday Festival. It had grown from a one day event in Hastings the first two years to a two day event at The Green Door Store in Brighton and was now meant to be a three day festival, with the opening night at The Green Door Store and two days at Concorde 2.

Sadly circumstances derailed this, first Covid postponing the event for two years, then economic woes caused by the UK government, which were exacerbated by the Russian antifa invasion of Ukraine and general uncertainty. SCEM had to take the unfortunate decision to cancel the Concorde 2 plans. Out of the ashes of this, they managed to rescue the Friday opening night and had a DJ night at the Yellow Book on the Saturday and another event on the Sunday with some of the bands who were to have played. The photos from the latter event will appear in a couple of weeks.

The Friday night became an awesome gig despite all of this. Opening band, Halveksia, kicked the evening off with a storming doom laden set. They are based locally and include promoter Mark of Jackhammer Promotions on bass. They played to a reasonable sized crowd, getting them warmed up for the rest of the acts.

Next up were a band that had travelled all the way from the north-east, Giant Walker. Their music is more in the progressive end of things and were a good counterpoint to the other bands.

In the middle slot were a band that I had been aware of for a while but had only managed to catch once before at the Restart The Heart festival at The Black Heart last year. They are Lowen, Shem and Nina who form the core of the band, helped out by Flow and Richard. They play progressive doom with a touch of middle eastern music. I had forgotten how good Nina’s vocals were and I was again blown away.

Vehement seem to be getting a lot of exposure on these pages, and each time I seem to comment that they are getting better. Spurred on by Lowen setting the bar extremely high and playing to a home crowd, they pulled something more out of the hat and played their best set yet. They seem to have stepped up since Tubal Qayin left them but them coming back to guest on vocals raises them even higher. On a sartorial note, it looks like Nina and Sol share the same tailors.

This left headline band, Diablery, who had flown in from Greece, with the almost impossible task of performing an even more stunning set. They managed to do it, their Black Metal winning fans from bands and punters alike. Had the rest of the festival weekend gone ahead, this would have been a great start and would have meant that the bands following would have something to prove.