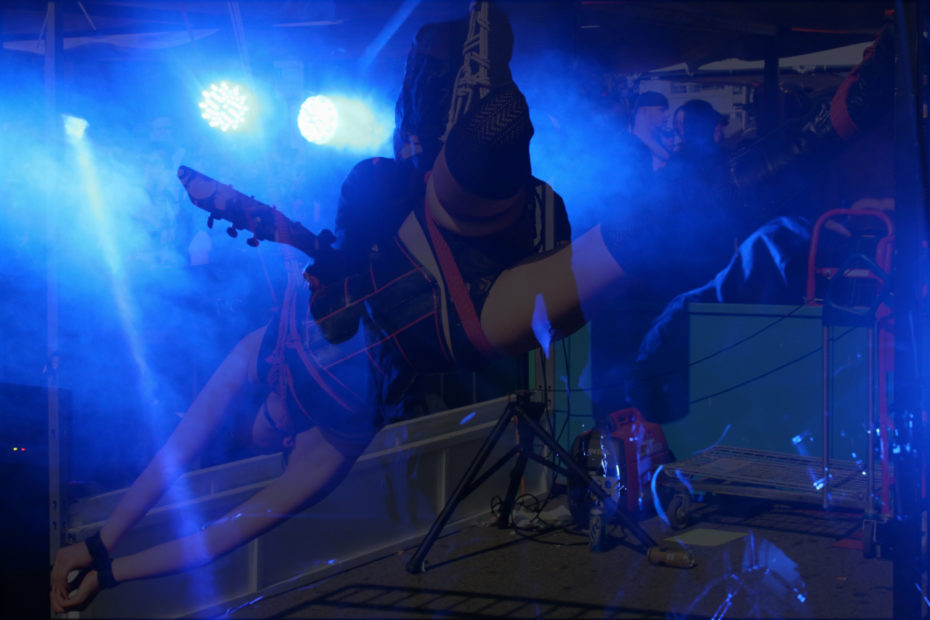 Why have I picked the genres that I now shoot as Green Wyvern? Have I stopped shooting other genres of music?

Back when I started taking photographs again, the photos that I wanted to take weren’t even music related. I was at the 2009 Folsom Street Fair in San Francisco, originally a gay event but it had spread, welcoming the wider queer and fetish community. A friend of mine, SubmissAnn, was there doing pony play and I had been staying with her the week previously. I took quite a few shots around the event, including live bands and a fetish Morris but the thing that mainly drew my eye and lens was the Shibari. On my return to the UK I started to get involved in the Shibari community but was unable to find myself a model who I could tie and shoot.

The following year I got involved with Arivmia and started shooting their gigs and others in Hastings. I didn’t mind what genre they were as long as I enjoyed the music. I shot a lot of the local indie bands, singer-songwriters, punks, metal bands, folk and so on. In 2012 I started shooting gigs in London and broadened the genres of the music I shot as I met more musicians, promoters and venue owners. It was then that the Green Wyvern Photography idea took off.

In 2017 I was a bit burnt out. I shot a Metal to the Masses gig in Brighton in April and decided not to publish the pictures. I took a rest for a few months, only shooting when I felt like, intending only to shoot again at The Blackwood Gathering in October that year. Shortly before that, one of the musicians I had come to like, Antonio Lulic was playing an event put on by Zoe Konez, another musician I liked, so I shot that too. I didn’t publish anything else that I shot with my main camera until the following year. Even now I still have shows that I haven’t published.

After shooting gigs and festivals the following year and into 2019 I started having a rethink. Around the same time one of the musicians I had shot came back with some useful criticism and I decided to limit what was being shot as Green Wyvern.

The music I was really enjoying listening too at the time was mainly Black Metal, doom, dark folk, prog and some pop so I decided to concentrate on them. I haven’t shot any prog for quite a few years, since moving away from Hastings (and just because you are mistakenly described as prog doesn’t mean I will include you, fans and lazy reviewers of Tales of Autumn take note). I will hopefully shoot more later.

This doesn’t mean that I have stopped taking pictures of other musicians in different genres. I created another entity after a shoot for a band playing a charity gig and have another for anything else I don’t think fits in with the Green Wyvern identity. Covid has given me a chance to work out how I want to place things in the future, although I am a bit unsure about some things – I have a model shoot with someone more into prog and I have a couple of Matilda’s Scoundrels gigs I want to publish, is their folk punk dark enough for Green Wyvern?