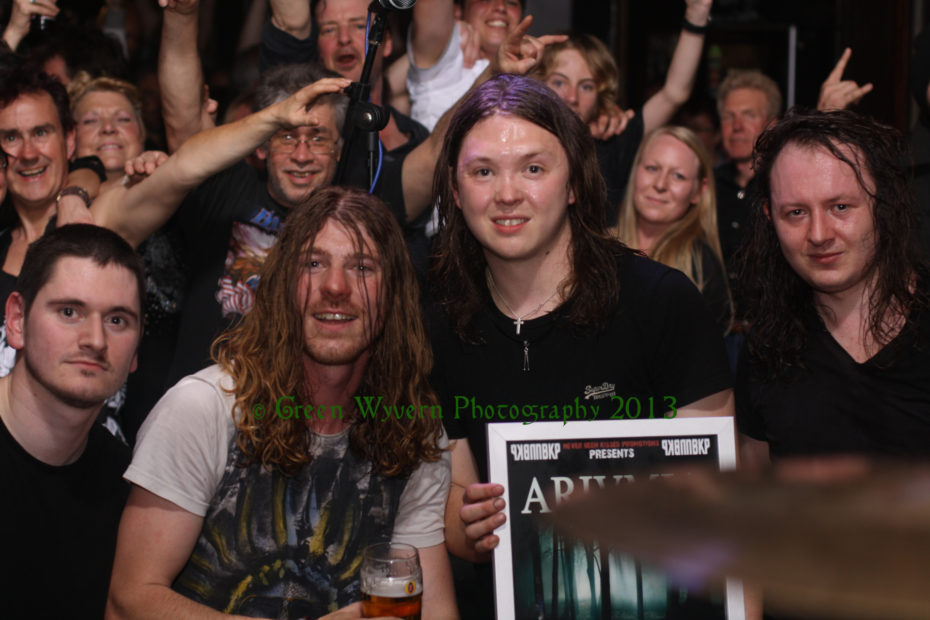 Arivmia were one of important bands in my growth as a photographer. The name Green Wyvern Photography came from a comment on Facebook by a singer called Dan. He was vocalist for Arivmia, a Hastings band formed by John who had previously been with other local favourites Dr Fonda.

In the good old days of MySpace, before it became less user friendly, it was easy to find bands who played the sort of music that you liked and it was also easy for bands to find potential fans both locally and further afield. My Green Wyvern page was contacted by Arivmia and I liked what I heard of their music. It was like early heavy metal (although they preferred the American term hard rock) and reviewers made much of this.

In 2010 I first went to see them play at the White Rock in Hastings at a local music showcase. I spoke briefly with some of the band after the event. Their next gig was upstairs at The Carlisle for Dan’s girlfriend’s birthday and I came along. After a good set of their own music they did a very lacklustre cover of the Stevie Wonder song Superstition. I spoke to Dan at the end of the gig and criticised their effort on the song, praising the rest of the set. It shocked him but also meant that he and I and the rest of the band became friends and they were confident I wouldn’t bullshit them if they asked my opinion. I started shooting them at gigs after this, building up my experience, as well as starting to shoot other bands in Hastings too.

I almost became a fixture with the band, going to most of their gigs, travelling to London to the Hope and Anchor and the Dublin Castle and other places to shoot and support them. It gave me a chance to meet other musicians and bands too. At General Henry’s in Littlehampton 2012, the band were amused by me collapsing with laughter at a covers band for being so awful that Arivmia’s cover of Superstition in 2010 sounded masterful. In 2013 I was proud to see some of my pictures used in their first album, Echoes From the Wilderness, and I was there to shoot the album release gig, where they were ably supported by another strong local band, 1000 Tons.

Whilst they don’t fall into my current core brand identity they were very much a part of my growth as a gig photographer. I was able learn, grow and experiment with my technique at their gigs and behind the scenes.

After losing Messy from the lineup in 2013, the band brought in another bassist but did not last much longer.

In 2012, the first song that was ever dedicated to me was by Arivmia, a cover of Superstition that they had made their own.