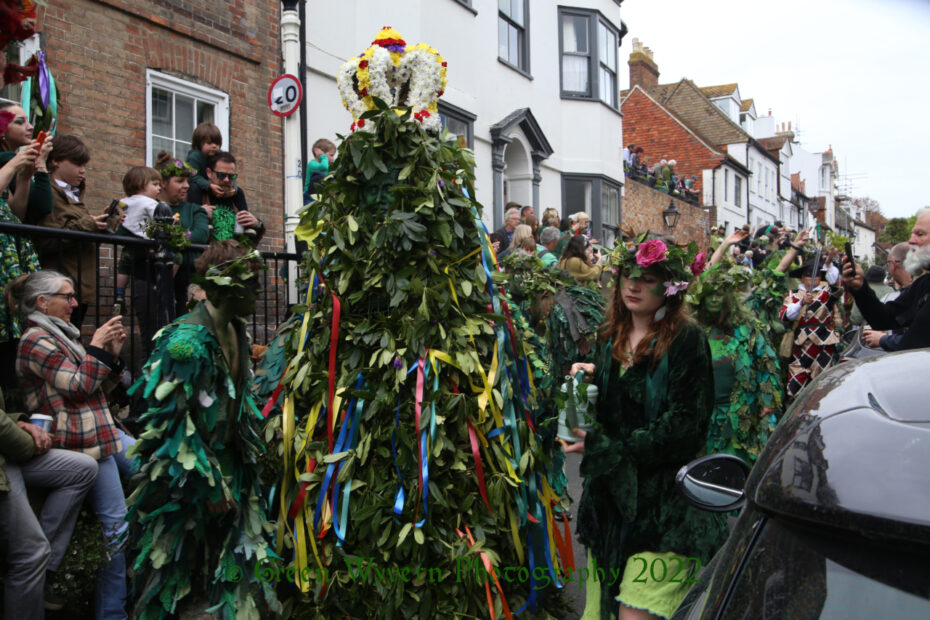 The Mayday Bank Holiday weekend is an important one in the calendar of Hastings, East Sussex. On that weekend two events are hosted in the town, which draw in tens of thousands of people between them. The whole weekend is given over to the Jack in the Green celebrations. On the Monday, this is joined by the Hastings Bike Day bike Run, an informal event which has been going on since the end of the 1970s.

Jack in the Green is a tradition going back a few centuries with milkmaids and chimney sweeps parading through towns with a fertility symbol, which some equate with the Green Man. It was revived in Hastings nearly forty years ago by, amongst others, Keith Leech, who has received an MBE for his work with it.

There are several events over the weekend, including Morris dancing, drumming, folk concerts and, on the Monday, the highlight, the release of the Jack, followed by a procession through the old town, ending up on the West Hill. On the West Hill there are stages for different acts to perform and, on one of which, the Jack is slain with echoes of the sacrifice of the King to ensure that life goes on. The procession included the Jack, escorted by his Bogies, sweeps, milkmaids, local dignitaries, Morris sides from around the UK, drummers and locals including artists.

My day started by getting the train to town and walking to Rock-a-Nore to watch the start of the procession, catching up with friends who were involved before it started. After shooting at Winkle Island, I headed into the High Street shooting more of the procession there. After that I went to The Carlisle, the biker pub on the seafront, my old local when I lived here, to meet more friends. In the afternoon I caught up with more friends on the West Hill, before heading back to The Carlisle and then home.

Interestingly, the government tried to derail the weekend in 2020 by moving the Bank Holiday. The Jack got his revenge, bringing Covid-19 to the world, causing the new Bank Holiday events to be cancelled. Many of us celebrated Jack in the Green online on what would have been our traditional Bank Holiday Monday.

Currently listening to “Green Man” by Magicfolk from the “we bring you a king with a head of gold: dark britainnica II” compilation.