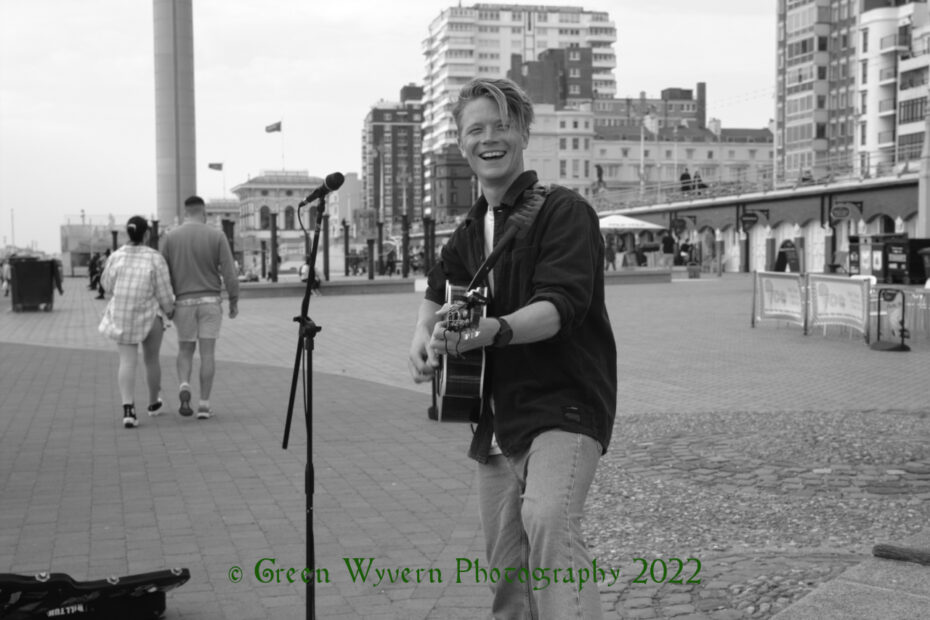 Wind back several years, shortly after I started getting into the swing of things with the gig photography, I was shooting a Hastings band in Hoxton. There were several acts that were also playing on that bill and one of those played a ska’d up set, which impressed me. I got hold of a unlabelled CD that night and decided that this was a band I wanted to see again.

Becoming a fan, I caught them quite a few more times through their career, helped to crowdfund their first official release and shot the album launch. They have a t-shirt of that gig and you can see the back of my head at the front of the picture on it, camera in hand. They played Hastings quite a few times, often at The Tubman, including the Fat Tuesday festival, and supported OPM at the Tubman on Tour gig at The Carlisle. They were called Ghouls. Sadly they called it a day in 2019.

Benedict, their frontman, has now moved to Brighton and he regularly busks on the beach there, near to the i-360. I wanted to catch up with him again so I headed off there last Saturday, again with camera in hand. He played mainly covers, throwing in a Ghouls song for me and playing some of his own material.

With his partner, he has managed to make a good life, which he talks about in his vlog, August Radio Project, on YouTube and other podcast sites. He also talks about the music industry and playing in general, dispensing words of wisdom alongside reminiscences. He has also got involved with Brighton Beach Busking, interviewing other buskers for the project. I was lucky to catch the guy behind that too, as he came down to shoot some footage.

If you are ever on the seafront at Brighton, give your ears a treat and watch Benedict as he busks there.