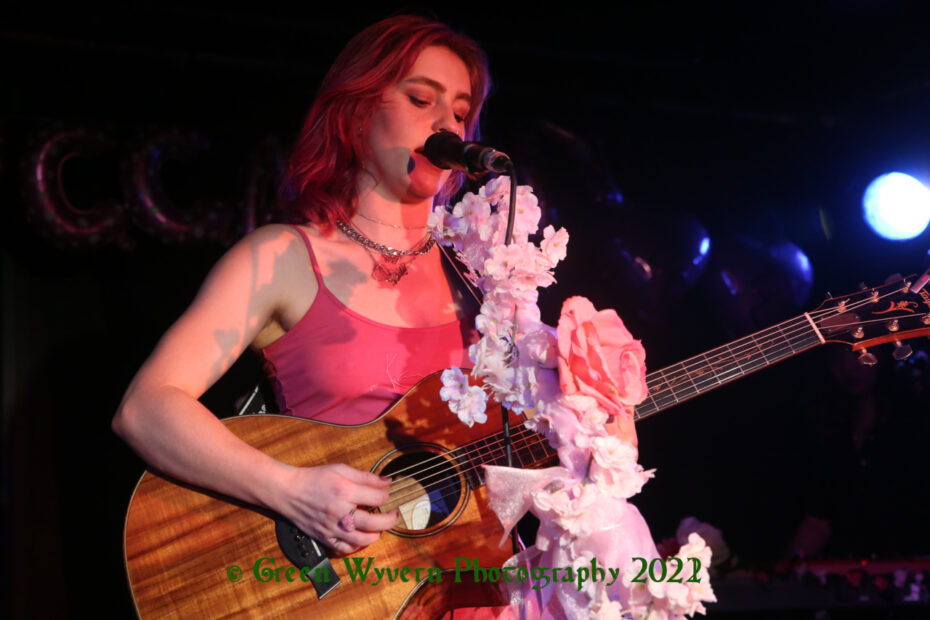 What happens when a young woman who has written songs and song lyrics about breakups and the negative side of romance decides to do a gig in February? You get Beth McCarthy’s Anti-Valentine gig on the eve of Valentine’s Day. Whilst many people were swelling Hallmark’s and other large companies’ coffers with loveless commercial V-Day products, some of us were singing along to Beth’s songs.

Before we got to hear her though, we were treated with the Canadienne singer-songwriter Cate, who Beth had requested, as a fangirl, to open the evening. Cate’s songs are simple tunes with very clever use of words, bringing various emotions to the audience. Some of her fans had turned up to support her.

At the start of the main set, the band, Michael Turnbull and Tna Keys, came on and started to play. Beth bounded out, holding a big white teddy bear, whose head was ripped off when she reached the front of the stage, a stage decorated with pink roses and other flowers, hanging hearts, broken heart balloons and big blow-up letters spelling her name. The audience weren’t left out, as we had been handed pink glow bracelets (or for Antonio Lulic, two put together as a necklace). Beth launched into her set, interspersing songs with anecdotes and commentary about the songs.

The set ranged from completely new (I Don’t Know HowTo Talk To Girls) to some of her earlier work (Little Lies and Wildfire). The bigger crowd reactions were for songs written and released in lockdown, including She Gets the Flowers and If You Loved Me Right. For some of the tracks, Beth sang, for others she played guitar and some were played solo.

After the set and encore finished Beth showered the audience with pink roses. She came out to speak to members of the audience, sign merch and pose for selfies (guilty). She was very happy to see everyone and spent a good time talking with individuals and groups. She has been picking up fans since the early days, with lockdown being a boost for the online side of things.