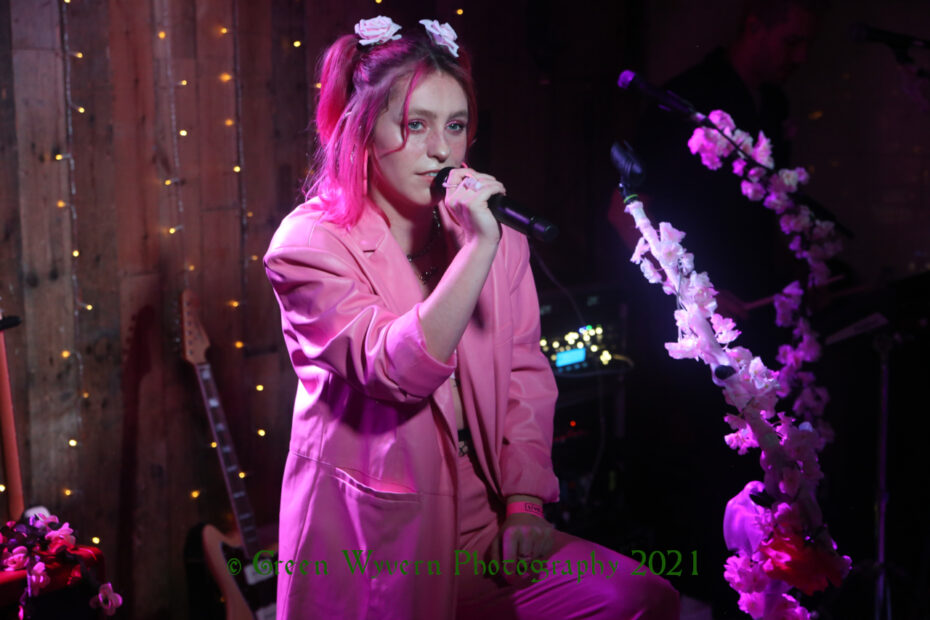 After bludgeoning my ears with Black Metal, doom and other forms of metal for several weeks post-lockdown, it was time to change things a bit. Well actually, quite a lot. I headed off into London for Beth McCarthy‘s gig at The Waiting Room in Stoke Newington for an evening of pink-hued pop. To make sure I blended in I eschewed the usual metal t-shirt and wore a red shirt.

A short while after I arrived, whilst waiting for the doors to open, I spied Antonio Lulic, who had inspired Beth in her early days, and through whom I had met and shot Beth in the past. It was good to catch up with him for the first time since November 2019 when I had seen him last play. Later on I was also able to catch up with Kal Lavelle, who was still grinning wildly, thanks to her co-writing credit on her (and Antonio’s) friend Ed’s latest international number one chart hit.

There was a lot of anticipation for the evening, as Beth had gained many new fans during lockdown. She had made responses to several well known musicians’ songs and had written some completely new tunes of her own, garnering millions of hits on Spotify and YouTube. The stage was bedecked with pink flowers, Beth was finishing this off by hanging some to the speakers when I popped in and said hi.

The audience had to wait as the evening had to be opened by the support act first. Quite often the support act for gigs is just a warm-up act for the headline artist and offers no challenge to following them. This was not the case for Jazmine Flowers who proved to be an awesome act in her own right. I wasn’t surprised when her manager later told me that she had headlined a gig at The Grace shortly before this. Both her and Beth are on LiveNation’s radar – this gig was promoted by them. She comes over as a real person, no fancy stage airs and graces and backs that up with a great voice and great tunes. At the end of her act she had raised the bar high for Beth to follow.

This didn’t faze Beth as she came on stage and it was difficult to work out who was more excited about this, the audience or her. To emphasise her lack of height she wore a jacket, pink, with rolled up sleeves and trousers, pink, with rolled up cuffs and she had a box to stand on. For all of that, she started on a high and just kept on going up through her set. It was exciting to be watching this, being part of it all. Lockdown seems to have proved beneficial for some artists and Beth is one of these, giving her new energy as well as being able to reach new fans. As can be expected, some songs were greeted with more enthusiasm as others, as people recognised them either from exposure to her recent online work or those of us who know more of her work.

The audience’s familiarity with Beth’s work showed when at various points they enthusiastically joined in, singing along with songs, especially “If You Loved Me Right” and “She Gets the Flowers.” This surprised Beth somewhat, in a pleasant way, adding to her excitedness. At one point she got off stage with just her guitar, leaving her band behind, and played in the middle of the audience, with some of us singing along. “She Gets the Flowers” ended off the set and Beth threw pink roses out to the audience which clamoured for more.

Hopefully both of the night’s acts can capitalise on their work that they had put into it and they can go on to achieve greater things. I will be following their progress.