Restart the Heart – Friday and Saturday 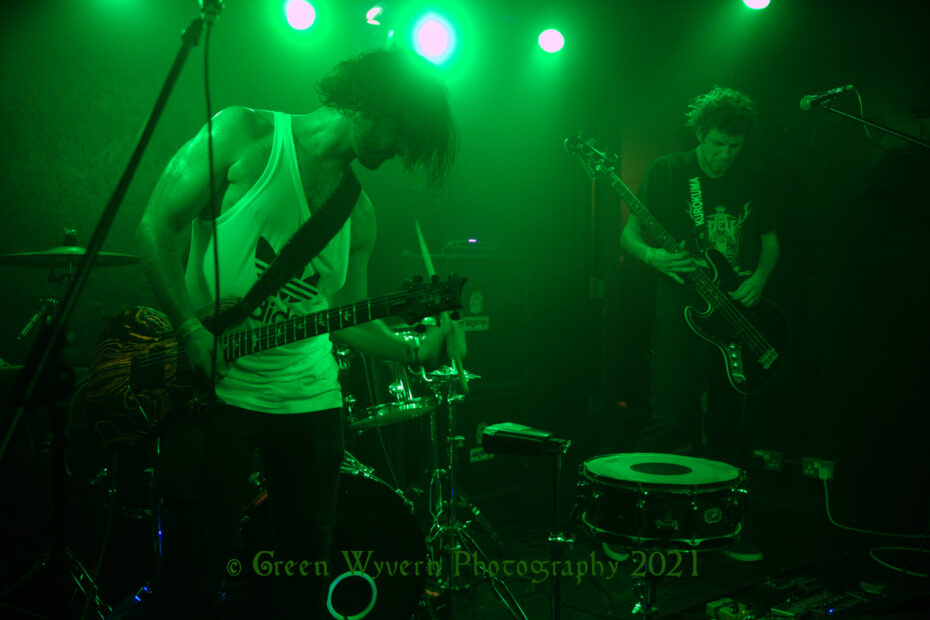 Friday night at the Black Heart was mostly off-topic for this blog, so there is only one band to cover here.

The headliners should have been Dawn Ray’d, who I shot in January last year but were unable to play. Replacing them, a pleasant surprise, were a very interesting prog doom band, Kurokuma. Theirs was an interesting set, playing about with rhythm and all three of the musicians played percussion at some point. During their set, a photographer from The Guardian took shots of the crowd for an upcoming article on the effect of Lockdown on venues. Despite being the headline band, Kurokoma didn’t play the last slot as they had to get home to Sheffield.

Saturday was a bit different, almost all some variant of doom with a Black Metal band thrown in there for good measure. After lunch, I had a slow walk to the Black Heart due to all of the tourists and shoppers that Camden is full of nowadays, displacing the the alternative crowd that originally brought people to the place. Getting there, I almost immediately bumped into Nick Ruskell who was Djing upstairs with Emily as Witchsorrow had had to drop out of playing.

After I got my beer we chatted and he recommended some of that day’s bands. Allfather he described as speeded up sludge, which was an accurate description. They played a good opening set. They were followed by a succession of other good bands playing variations on doom. Butcher in the Fog, a threepiece, played a lively and entertaining set, with a lot of humour showing through. This was carried on by Possessor who also played a solid set. In between these two was Grey Brain.

Following Possessor were sole Black Metal band, Jøtnarr, one of the few bands from the weekend that I had seen before, having played at Myrkur’s iconic gig at the Underworld several years previously. After them we had Gurt, whose set was much anticipated and well enjoyed.

Band of the day for me were Morag Tong who played a set tinged with prog, with vocals from the drummer, ending off their set with a wave of sound from the FX pedals. Conan finished off the proceedings with a heavy doom set, finishing the night on a high, apart from some dickheads pushing people about, spilling drinks and stopping some people enjoying the band.