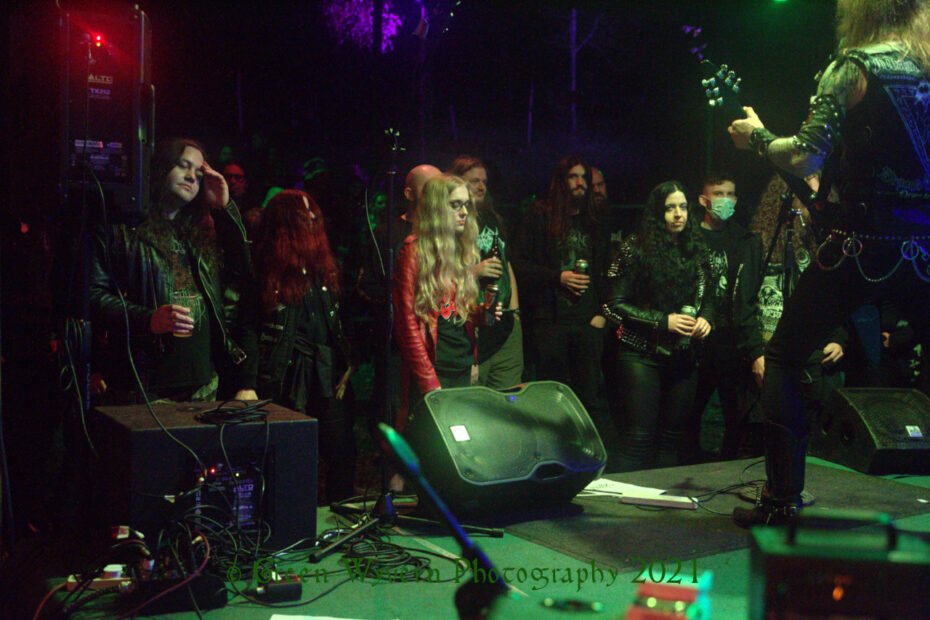 Driving up from the Sussex coast, I rocked up early afternoon to find Birgit on the gate. After she checked me in and we had a chat I drove off to find a place to park and sleep. I had hired a van so that I could sleep in the back, kitting it out with a foam mattress, sheet and duvet. I can do camping but it is a bit more comfortable this way. After sorting out a few things I walked around the site, greeting various other campers on the way.

The weather was good, having driven up through a grey south and Midlands, the skies had started clearing north of Manchester. It wasn’t cold, although it did get slightly chilly in the evening.

It was a while before the bands were due to play so I hung around the stage area talking to various people – Barry the site owner, crew, bands, merch people, punters and another photographer, Fay from the Isle of Wight. Soundchecks went on disturbing the peace and making it awkward chatting at times. There was time between sets for me to catch up with people I knew and to meet more people.

At 5pm Barry came on stage to announce the start of the proceedings. First band on were Blasfeme, with an expanded line-up from last Sunday with the addition of a bass player. The guitarist/vocalist and the drummer sported bald heads and corpsepaint, their new bass player covered his head wearing a hooded robe. They played a strong Black Metal set with nods to older heavy metal, the bass adding a bit more depth.

After a short changeover Argesk took to the stage, corpsepainted up. Their line-up was bass, guitar/vox, keyboards/vox and drums. Their tongue in cheek view of Black Metal went down well.

Next up were Masters Call. I hadn’t seen these guys before and they impressed me with a solid slab of Black Metal, the music and leather and studs style harking back to older days. Another impressive set.

Nefarious Dusk seems to have a fluid line-up. The latest project of festival promoter Paul, they included Kieran from Andracca as in the last Northern Darkness, with a change behind the kit. Again, they didn’t disappoint although their set was short.

Trivax are a band to catch if you haven’t already done so. The threepiece perform a powerful Black Metal set and frontman Shayan encourages the crowd to join in.

Headliners Ninkharsag started a bit late, despite not putting on corpsepaint. Hiding behind a lot of smoke, they still managed to pull off a good set. At the end of this, they left the stage briefly, to return for an encore.

After things settled down, the chant went up for Barry. Barry of the Blackwood led a Moonpond Ritual, baptising newcomers to the festival.