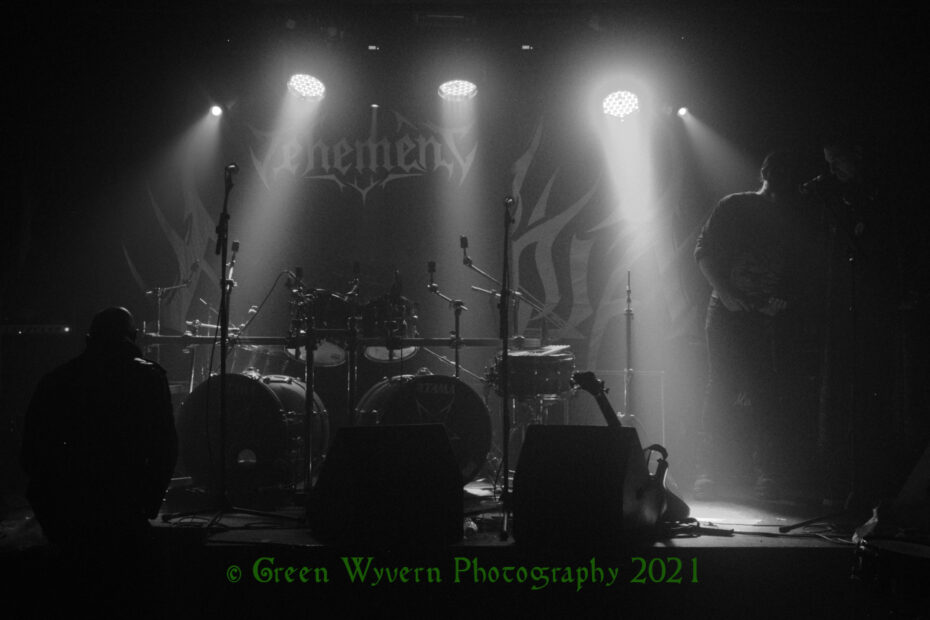 Several bands and numerous fans, including other musicians, promoters and others involved in the scene turned up to Nambucca one Sunday to support NahemiA‘s album release. The show didn’t start very early as shown on some of the publicity material and the bands ran over so, sadly, I had to leave before the headline set, the main band that I had wanted to shoot.

First up were Decimated Cross, corpsepainted and playing a solid Black Metal set to warm the crowd up. Second on were corpsepainted two-piece Blasfeme from Bristol, hard and brutal music from drums and guitar/vox in counterpoint to the measured tones of the intersong comments. From oop North came Volniir, also corpsepainted, headed by a southern emigre and finally were the south coast’s cleanfaced Vehement (who said southerner had recently left).

Despite my disappointment of not being able to catch NahemiA, it was good to see the other bands, especially being able to catch up with the guys from Vehement, most of whom I hadn’t seen since before Lockdown. It was also good to catch up with Tubal Qayin who had recently left Vehement, and was now fronting Volniir, and his replacement Sol. I have my own theories of why he left, the main one being that the other members of Vehement have become rather follicly challenged since I had first seen them, either in the band in when I met them in 2015 or since they joined – he still has a strong head of hair and is probably worried that he will join them or elect to shave it off like Andras 🙂 Apart from NahemiA and Vehement, I had caught none of the bands before so I was pleasantly surprised by the first three bands, with a special mention to the two pronged attack of Blasfeme.